We’ve all been there — we finally fall asleep, and then a car goes by or the furnace starts with a whoosh and just like that, we’re wide awake. Again. The sudden change in noise levels is what wakes us up, and the tiny jolt of adrenaline we feel until we can identify the sound is what keeps us awake. According to a sleep study conducted by The Sleep Foundation, 74% of Americans say that a quiet room is very important to getting a good night’s sleep. 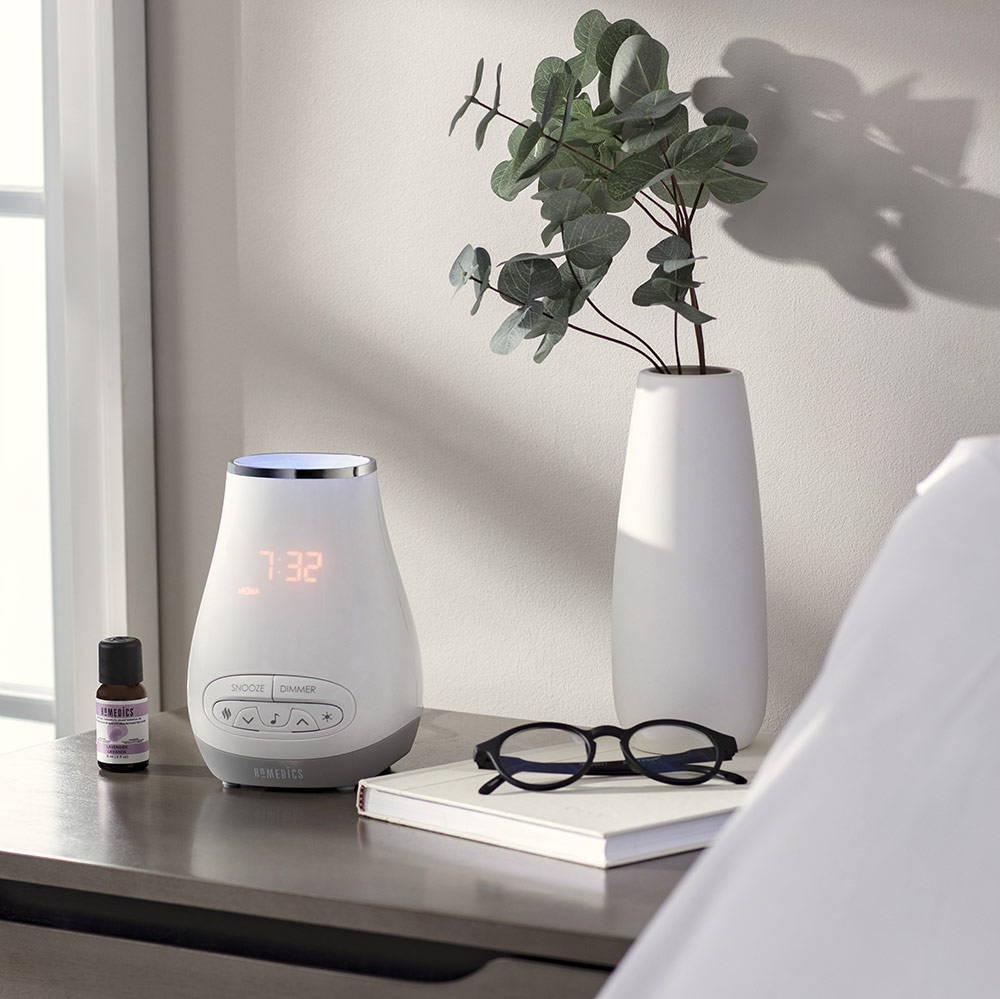 Noise machines offer a variety of options, even distinguishing the type of sounds they generate with colors: white, pink, and brown. Shop HoMedics Sound Spas →

Outside of moving to the woods or burrowing our heads under a pillow, there are other options that can help us enjoy a deep sleep. It may seem a little counterintuitive, but noise machines can help mask those sudden changes in sounds. They work by generating a soothing, steady drone, whir, or hum and there are other nature sounds that are available in some devices. These sounds can smooth out ambient noise levels to help keep us in a more restful state and let us wake up refreshed. Noise machines offer a variety of options, even distinguishing the type of sounds they generate with colors: white, pink, and brown. So, what’s the difference?

A white noise generator sends out a soothing drone that resembles a familiar fan sound without the unwelcome blast of air. It operates by emitting all of the high, low, and medium frequencies that the human ear can hear, resulting in what some may liken to a staticky hiss.

The sound covers up all of those random noises, e.g. the house settling, a spouse snoring or a loud vehicle going by, allowing us to get to sleep and stay there, more comfortably. A better quality of sleep can lead to lower blood pressure, a reduced risk of heart disease and an elevated mood. And a few studies have shown that sleeping with white noise can help memory and concentration, among other benefits.

Pink noise is a form of white noise, but instead of representing all of the frequencies equally, it dials down the volume of high frequencies. FYI: The human ear hears higher frequencies first and can perceive them at lower volumes than mid- to lower-range ones. The lowered volume of the higher frequencies means that we hear the sound as a more balanced listening experience. Pink noise generators can emit sounds that resemble wind or a steady rainfall. This type of generator can seem more soothing to those who prefer natural background sounds. Like its white noise relative, pink noise can help users achieve deeper sleep, which is associated with improved memory. One study suggested that adjusting the timing of the sounds was just as important as the sound itself to maximize memory enhancement results.

Brown noise, another form of white noise, reduces the higher frequencies even further, allowing the lower-range ones to come through more clearly. The relaxing tones you might hear include the roar of a rushing stream or a strong wind that comes before a storm. The lower frequencies are more resonant and can appeal to those who love to listen to rolling thunder or the sound of the surf coming in.

A Hint of Nature

Nature sounds are another option that noise generators offer. They combine white, pink, and brown noise with natural sound elements, such as thunderstorms or ocean waves. These sounds operate on a continuous loop. Depending on which machine you choose, you’ll have a variety of features, such as tone control that allows you to increase or decrease the higher frequencies. Some machines offer an adjustable timer that’s perfect for those who have trouble getting to sleep.

Choose What Works Best for You

If you sleep just fine at home, but have a harder time when you’re trying to sleep in a strange environment, you may want to choose a portable, battery-operated sleep machine. The Deep Sleep® Mini, for example, offers white, pink, and brown noise and 2 nature-based sounds. Another portable option is the SoundSpa® Ultra Portable machine. It offers a mix of 12 soothing sounds, with an emphasis on natural ones. Both allow you to set the timer for specific meditation or relaxation periods, while the battery provides up to 12 hours of therapy. 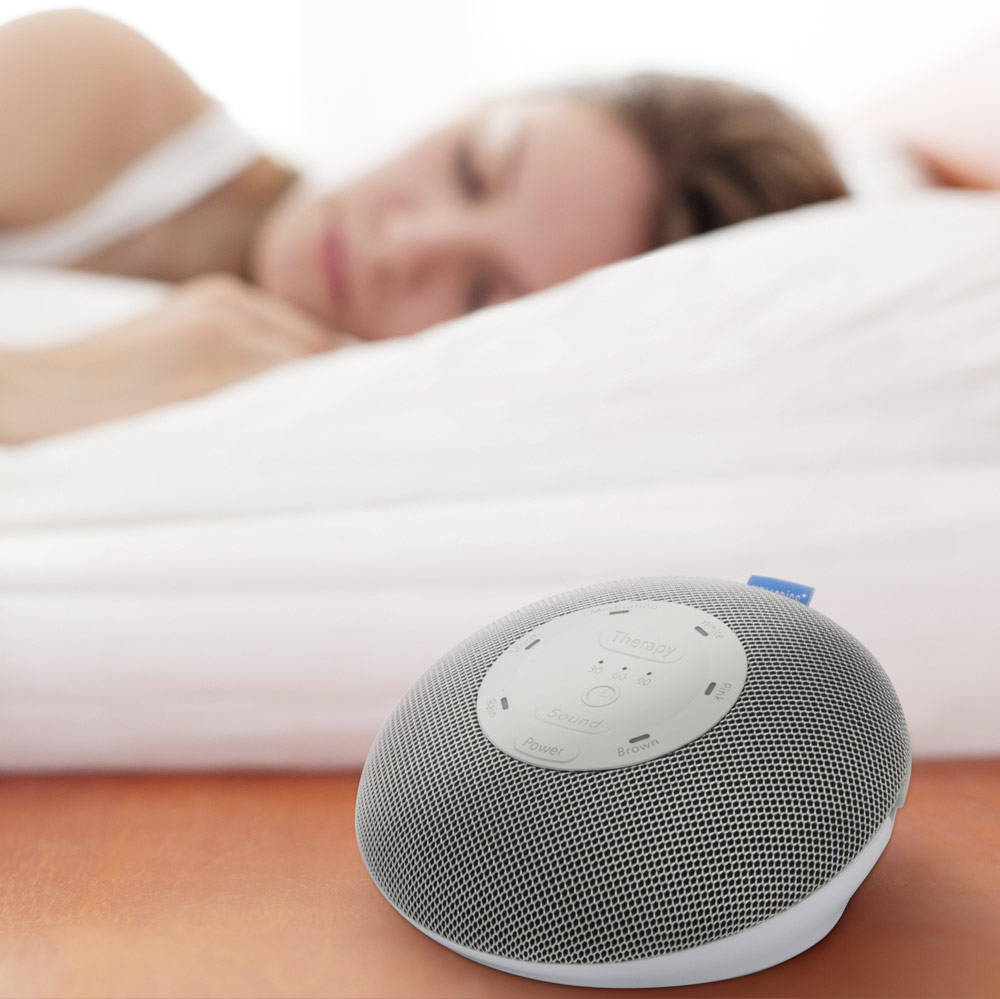 You won’t need an electronic army of clutter on your nightstand with the all-in-one options — they combine sleep machines with other important bedside features. Be sure to check out the SoundSpa® Slumber Scents that offers an integrated diffuser for a relaxing and aromatic mist, along with 6 sound selections and an alarm clock. The MyBaby SoundSpa Ultrasonic Humidifier blends a 1-gallon humidifier with 4 sound choices and a soft night-light for gentle illumination.

Deep sleep is within reach — a sound machine can help you get the rest you need and wake up feeling refreshed and ready for your next adventure. It’s sound judgment, all the way around.